The gallbladder is an oblong pear shaped structure located on the underside of the liver. It is located at the level of the middle hepatic vein aka Cantlie’s line between segments IV and V. The normal distended gallbladder is approximately 7-10 cm in length and 4 cm in diameter. The capacity is usually 50 ml(1.8 fl oz) of bile. The GB is divided into neck, body and fundus, sonographic appearance is anechoic with an echogenic wall. 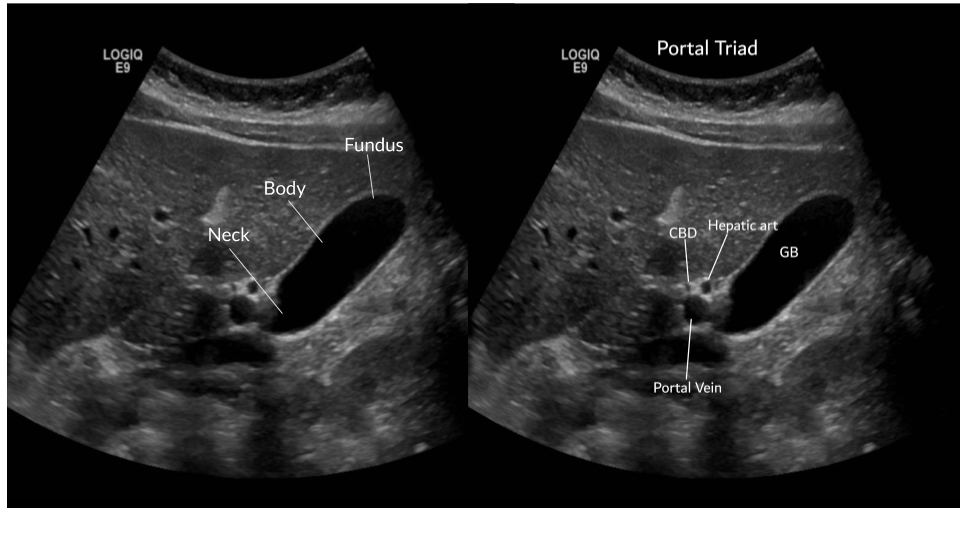 Increased through transmission is seen posterior to the gallbladder. The GB can be folded on itself in the shape of an S or have folds, a pouch in the fundus (Phyrigian cap) a pouch in the neck (Hartman’s pouch) and mucosal projections in the cystic duct (spiral valves of Heister). 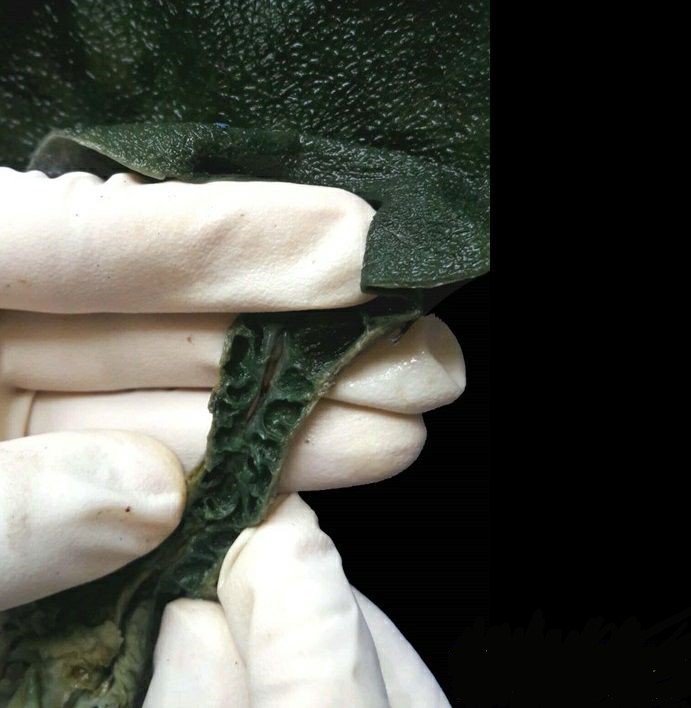 Scanning the GB should include RUQ images of the Liver, biliary tree and gallbladder in sagittal and transverse planes.

Things to be aware of are situs inversus and heterotaxy where the GB can be found on the opposite side of the body or midline. Agenesis which is rare and can be associated with biliary atresia and other bile duct anomalies. Also gallbladder duplication, which is rare. Intrahepatic gallbladder is a failure of migration during fetal development. A GB that is covered by visceral peritoneum may exhibit increased motility which can lead to volvulus. A contracted GB can give the appearance of a thickened wall, but this is a normal finding and should not be confused for true GB wall thickening.

Biliary sludge is a common finding on GB sonography. It is mainly comprised of calcium bilirubinate granules and lesser amounts of cholesterol crystals. It can be asymptomatic. Risk factors are rapid weight loss, gastric surgery, total parenteral nutrition (tpn) in fact you see it quite frequently in ICU patients that are receiving tpn. Some medicines may predispose to sludge like Rocephin. It is considered a precursor to stone development, in one study 5-15% of patients with sludge developed gallstones.

On ultrasound you’ll see low level echoes to echogenic debris that layers in the dependant part of the GB and is mobile with patient position. Sludge may aggregate into clumps which may simulate masses or polyps. This is known as tumefactive sludge. The gallbladder may also be completely filled with sludge making the whole GB complex isoechoic to the liver known as hepatization.

Gallstones typically consist of a mixture of cholesterol, calcium bilirubinate, and calcium carbonate. Gallstones can be found in children though it is less common, there are even cases of gallstones in utero. Pediatric patients who have hemolytic anemia, such as sickle cell disease and spherocytosis have an increased risk for developing gallstones, particularly bilirubin stones from the breakdown of RBC’s.

Risk factors for cholelithiasis are:

Sonographically you’re going to see echogenic mobile structures in the GB which can be solitary or numerous and vary in size from small to large. Stones will have posterior acoustic shadowing. The gallbladder can be completely filled with stones obscuring the lumen leading to the wall echo shadow WES sign.

Mobility of the stone can be observed by scanning the patients in left lateral decubitus as well as supine. Scan the intra and extra hepatic biliary tree to look for dilatation, stones or both.

Asymptomatic patients typically don’t require treatment and stones in this population are often found incidentally. Biliary colic develops in about one in five patients.

If biliary colic develops, it is often mild initially, these patients may undergo elective cholecystectomy, a third of patients with one episode of biliary colic do not go on to have a recurrence in up to 2 years. One in five go on to develop complicated cholecystitis.

Represents 10% of all cases of Cholecystitis, thought to be caused by

GB stasis and ischemia or biliary blockage by sludge. The GB is typically distended with wall thickening >0.3cm, pericholecystic fluid and/or wall edema in the absence of ascites or hyperalbuminemia. AC usually presents in critically ill patients with sepsis and with jaundice without a clear cause. Complications are similar to calculous cholecystitis including emphysematous cholecystitis, gangrene and perforation.

GC is considered an evolution of cholecystitis. The incidence of GC ranges from 2% to 30% in all patients with acute cholecystitis. Gangrenous cholecystitis features focal areas of necrosis, bulges of the gallbladder wall, sloughed membranes, and ulcerative craters. GC can lead to GB wall perforation which can lead to increased morbidity and mortality due to peritonitis. This condition can be oftentimes indistinguishable from gallbladder empyema (pus filled inflamed GB) or xanthogranulomatous cholecystitis (from chronic inflammation).

A form of cholecystitis caused by gas-forming organisms (Clostridium or E. coli). Occurs in 1% of cholecystitis cases, but can develop rapidly leading to perforation and mortality (15-25%). Sonographically you’ll see an inflamed gb with hyperechoic areas in the gb wall representing gas with reverb, dirty shadowing or ring down artifact.

A gallbladder polyp is a mural lesion that protrudes into the lumen of the gallbladder. Cholesterol polyps are the most common type of polyps. They typically measure <10mm and may be solitary or multiple. Sonographically you’ll see echogenic round lesions adherent to the GB wall. They will not have posterior acoustic shadowing.

Adenomyomatosis is a benign condition in the epithelium of the GB wall. There is overgrowth of the mucosa, thickening of the muscular wall and formation of intramural diverticula known as Rokitansky-Aschoff sinuses. Within these cystic spaces biliary crystals can get trapped given the sonographic appearance of echogenic foci with comet tail artifacts posteriorly. The changes can be focal or diffuse.

A calcified GB is known as porcelain GB, thought to be calcification from chronic inflammation, on ultrasound you’ll see circumferential increased echogenicity of the GB with shadowing. Porcelain GB can routinely be imaged on radiography. Calcification can be focal or diffuse. Originally it was always treated with cholecystectomy due to a purported high risk of developing GB cancer. However recent research suggests the incidence is not as high as previously thought.

Gallbladder carcinoma is the most common biliary tract malignancy, but it is relatively rare, they present as a primary lesion 98% (85% adenocarcinoma) and as metastasis in 2% (50% melanoma 20% lymphoma remainder HCC, RCC). There is increased risk in patients with gallstones and chronic cholecystitis.

Sonographically you’ll see a mural lesion extending into the gb lumen, may be focal thickening or polypoid with a stalk. Color and spectral doppler may show vascular flow within the mass and stalk.

The biliary system is made of the cystic duct which comes from GB neck meeting with the hepatic duct forming the common bile duct (CBD) which travels through the hepatoduodenal ligament to the head of the pancreas meeting with the pancreatic duct. The terminal end is at the ampulla of Vater in the duodenum. The normal caliber of the CBD is <7mm (mean 3.4mm). Sonographically it can be imaged at the porta hepatis with the portal triad (portal vein, hepatic artery, CBD) and be differentiated from the vessels by using color Doppler. It can also be imaged the head of the pancreas posterolateral to the gastroduodenal artery.

Choledochal cysts are a congenital dilatation of the bile ducts. It is more common in East Asian populations. It is most commonly discovered in childhood, though up to 20% can be found in adults.

The disease is classified into 5 types:

Bile duct dilatation can lead to stasis of bile and sludge/stone formation. There is a predisposition to develop ascending cholangitis. It is common in patients with ARPKD and can be associated with hepatic fibrosis.

BIliary atresia is a congenital obliteration of the extrahepatic biliary system which results in obstruction of bile flow. The incidence in the US is 1 per 10,000 -15,000 live births. It is more common in asian populations. Typical symptoms are jaundice, dark urine and light stools. Sonography can be used to rule out other causes of jaundice, occasionally ultrasound can show an absent or small gallbladder and the triangular cord sign which represent the fibrous remnant of the extrahepatic bile duct. HIDA scan is better at evaluating for biliary atresia.

Choledocholithiasis is the presence of stones in the common bile duct.

Patients may be asymptomatic (up to 50%) or may have symptoms of biliary colic in the ruq or epigastrium. Other symptoms like pruritus, pale stools and intermittent jaundice may be present. On sonography will see biliary dilatation, depending on the location and size of the stones there may be GB enlargement and intrahepatic biliary dilatation as well. There will be echogenic stones with posterior acoustic shadowing. There may be one stone or multiple. At times the ductal stone may be distal to be observed with US, as such an Endoscopic Retrograde Cholangiopancreatography (ERCP) or Magnetic Resonance Cholangiopancreatography (MRCP) may be necessary for diagnosis.

Hemobilia is blood within the bile ducts and is associated with biliary trauma, usually iatrogenic (i.e. biopsy, surgery). Other etiologies include cholangitis, vascular malformations, abdominal traumas and malignancies. The appearance of blood within the biliary tree is similar to blood clots seen in other parts of the body. Often you’ll see intraluminal medium level echoes or hyperechoic material. More acute thrombus is typically less echogenic.

Pneumobilia is air within the biliary system. Also can be a sequela of biliary procedures, it can also be associated with emphysematous cholecystitis. Sonographically you’ll see linear and punctate echogenic foci with posterior dirty shadowing and ring down artifact.

Cholangitis refers to inflammation or infection of the CBD. Bile is normally sterile but may become infected due to stasis or obstruction which encourages the growth of bacteria. Bacteria may ascend to the biliary tree leading to ascending cholangitis. Anastomosis of the bile duct to the small intestine such as in a Whipple surgery may lead to cholangitis. Patients with cholangitis often present with RUQ and epigastric pain with pain radiating to the right shoulder.

Primary sclerosing cholangitis is a chronic inflammatory condition that occurs in the absence of choledocholithiasis or prior bile surgery. It is thought to be autoimmune in origin and is associated with inflammatory bowel disease, Langerhan cell histiocytosis, immunodeficiency, psoriasis and cystic fibrosis. It tends to be more common in males. Sonographically there is irregular circumferential thickening of the bile duct walls, luminal narrowing, strictures and dilatations. Cholangiocarcinoma develops in 7-30% of cases.

Cholangiocarcinoma or bile duct cancer is a rare tumor that originates from the epithelium of the bile duct.It is the second most common liver cancer in the world, after the more common hepatocellular carcinoma.

2 thoughts on “Gallbladder and Biliary Pathology”